NEWCASTLE drinkers made it a hat-trick of victories for Brewdog in the International Arms Race taste-off against Flying Dog.

The contest, which pits the Scottish and American firms attempts at creating an India Pale Ale (IPA) without hops, is taking place in five of the Aberdenshire-based businesses bars over the course of a week.

And after coming out on top in Aberdeen and Glasgow, visitors to the Dean Street pub, in central Newcastle, voted for option two in the blind tasting – choosing Brewdog’s spicy blend to the more sour offering from across the Atlantic.

As well as trying the 7.5%  beers, drinkers who went to the pub on Saturday August 25 also heard from Brewdog brewmaster & COO Matt Brophy and Flying Dog vice president Ben Savage, who came to tell people more about their ales.

Music for the evening was provided by local group Holy Moly and the Crackers.

The contest moves onto Manchester on Sunday August 26 and Camden, in London, on August 27.

To order either of the International Arms Race beers in bottle form visit: www.brewdog.com/product/international-arms-race 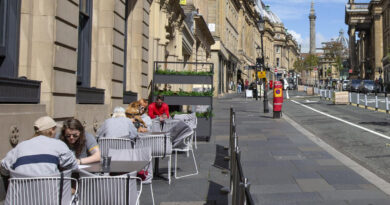