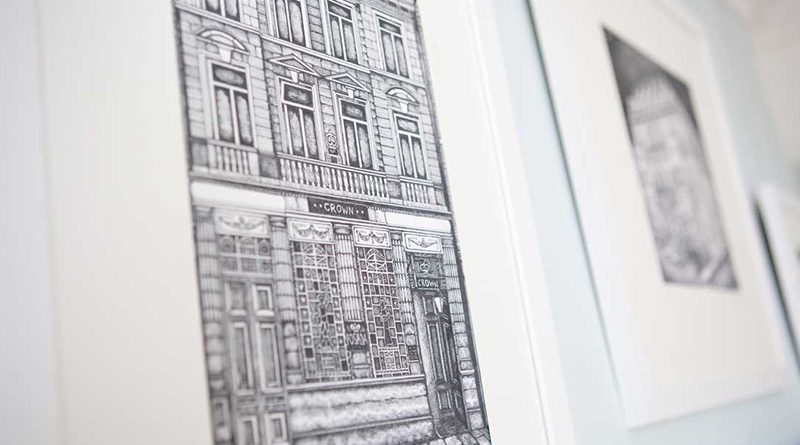 CONSIDERING what a major part of the British landscape pubs are it seems strange that they are not the subject of more art.

Think about it. Try naming a famous painting that shows the outside of a tavern or bar.

You could try and make a case for Edward Hopper’s Nighthawks, though that’s more a diner, and it’s American, but other than that it’s a struggle – there’s no Hay Wain for those more a fan of the inn down the road.

All of which just makes the work of Newcastle-based illustrator Ben Holland the more interesting.

“I just wanted to draw the world around me, the everyday places that play a big part in normal life,” said Ben, 32, a former finalist for the Biscuit Factory Foundation’s Young Artist of the Year prize.

“Pubs are the places people meet, go on first dates, split up, laugh, listen to music, celebrate the football and commiserate over relegation – They’re just a microcosm of everyday life and I love that.”

Growing up in Ormskirk, Lancashire, English literature graduate Ben moved to Newcastle in 2000, settling in Heaton and beginning to draw pen and ink portraits of his local area at night.

“I’ve always been drawing ever since I was a kid,” he said. “My mum and dad encouraged it and that’s the key really.

“You just like what you like, I suppose. When I was going through college I got more from Canaletto painting than a Mark Rothko. Everyone’s different. I just like attention to detail and at the moment, pen and ink enables me to do that in my own work.”

Ben’s Low Moon Over High Town collection features a number of almost ethereal portraits of Tyneside pubs, from the Free Trade Inn, Cumberland Arms and Cluny in Ouseburn, to the Trent House, Bodega and Crown Posada in Newcastle city centre, and even the Cumberland Arms in Tynemouth.

“If a person likes one of these pubs, they generally like them all,” said Ben, who grew up in Ormskirk, Lancashire, and whose formative pub experiences involved drinking lager in the town’s Greyhound tavern while listening to Bob Dylan and Pink Floyd on the jukebox. “They are ‘proper’ pubs with character and atmosphere, rather than stainless steel bars.

“I take photographs of the pubs from all sorts of angles as if I sat outside to draw them I’d be like a skeleton – each drawing takes around 20 to 25 hours to complete.

“I generally photograph the venue in both day and night before I start so I can understand the detail in the daylight and where shadows fall or lights shine at night.

“From that I can draw something that is a mixture of the two giving, hopefully, a unique spin on the building.

“A lot of people buy the pub pictures because they mean something – they met their now husband or wife in the Trent, went to their first gig at The Cluny or always had a pint with their dad on a Sunday at the Crown Posada,” added Ben, who now seeks out Cullercoats and Wylam ales if he finds them on the bar.

“You could call them a bit nostalgic in that respect but other people buy prints as they just like the style of the drawings themselves, or just like to drink in the pubs of course.”

Many of Ben’s prints are currently on display at Pink Lane Coffee, near Newcastle Central Station – or you can see them all on his website, www.lowmoonoverhightown.com.

And next up, in April, he’s planning to release a range of greetings cards and tote bags with new illustrations on.

“I’m also a massive music fan and have got a project underway drawing legendary music venues and record shops,” he said.

“On top of that I’m also chipping away at a book illustration project and a couple of commissions for weddings and birthdays so there’s plenty going on.

“And I might even draw a couple more pubs too, you never know.”

Cullercoats Brewery hopes to catch Girls on the Hop

Mordue delighted as they receive Battle of the Beers prize