Tyne Bank’s Silver Dollar has again proven itself the Newcastle brewery’s star performer with a top rating in the Great Taste Awards.

The 4.9% ABV American pale ale, which already in 2014 had a Siba gold to its name, has now been awarded three gold stars at “the Oscars of the food world.”

And its been a week of double delights for the Byker-based business, after its Mocha Milk Stout walked away with a “best in show” from the NewcastleGateshead EAT! Festival Food Heroes Market too.

“Out of over 10,000 products entered in the Great Taste Awards only 153 were awarded three gold stars, and only six of those were bottled beers, so we are over the moon,” the Byker-based brewery’s Sam Capper said.

“Plus, on top of Silver Dollar’s success, our Cherry Stout also picked up one gold star in the closely fought competition.

“It’s really nice to see our beers being nationally recognised for their quality.”

Closer to home, Sam said the recognition for the brewery’s darker beers was equally welcome.

“It’s been a great week here at Tyne Bank,” he said.

“We held a stall by Grey’s Monument along with many of the best producers from the North East all weekend, selling bottles, gift packs and our hand printed tote bags.

“And On Sunday, 60 products from across the market were tasted by a panel of judges, and our 6% ABV milk stout – made using Pumphreys coffee, cocoa and vanilla – was awarded a best in show rosette.

“A big thanks to both EAT! and Great Taste for these awards, and thanks to everyone who bought beer from the stall at the weekend.”

“Local beers such as Tyne Bank are hugely popular with our customers who have witnessed an explosion in great beers coming out of the region,” said Mmm owner Simone Clarkin.

“Whether you are a beer aficionado, or would just love to find out more about the great beers that are brewed in the region, then we would say come down this weekend and say ‘cheers’ to Tyne Bank on their very well-deserved award.” 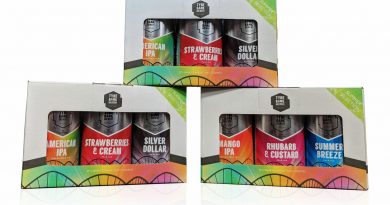