ANARCHY Brew Co has completed its journey from being Brew Star, changing its logo to the anarchist symbol and introducing a new design for its bottles.

The 16-month-old firm – which was forced to change it’s name last September after Lincolnshire-based Brewsters Brewery claimed it was infringing their trademark – initially just changed the name on its original branding, which featured a five pointed brewers star.

“When we had the palava with the name change we needed a new logo quickly and it was easier to change the old logo,” said brewery owner Simon Miles. “That got us by in that moment, but since then we’ve slowly introduced the anarchist symbol into some of our branding on t-shirts and pump clips.

“But with changing the bottles we thought we needed to do something new with the whole image.”

Having learned their lesson the company has trademarked the distinctive circled A in relation to beer and brewing, and begun the transition by replacing the old logo on their delivery van – and launching a new range of “squat” bottled beers.

“Until now we’ve been using the generic bottles that most people use,” said Simon. “But we wanted to change that for something more eye catching – something old school with a modern twist.”

“With the shape – we’ve not seen anyone but Meantime have anything similar – the matt labels and the anarchist symbol we think they’ll really stand out,” said Simon. “And they are quite heavy bottles, so hopefully the customers will be reassured they are getting a quality product.”

In time Simon said he hopes to see most of the Anarchy range made available int he new format – though for the moment, due to its continued success as a filtered bottled beer, there are no plans to release the firm’s first brew, Blonde Star, to follow suit. 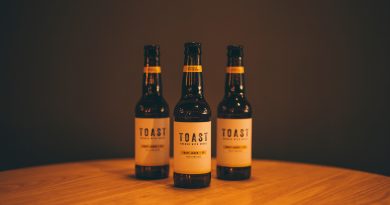