Friends descended on Byker’s Free Trade Inn to wish the railway worker well – and to get their hands on the new ales from Allendale, Anarchy, Northern FC, Temptation and Tyne Bank.

“The first ale I tried was in York in 1978-ish,” said Phil, who co-ordinates the website that tries to list what’s on the bar at any given time in Tyneside pubs. “It was either Tetleys or Bass and I had it in the Nags Head.

“Before that I used to drink McEwan’s or Holsten Pills – quite yuck when I think back now.

“What I like about real ale is the different flavours, and being able to taste and compare them. That’s why with the Birthday Bash I wanted five different styles.

“I approached each brewery individually and asked them to each do a type of beer they’d not done before – and having tried them, they’re spot on and I’m really chuffed.” 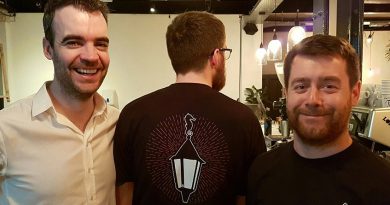